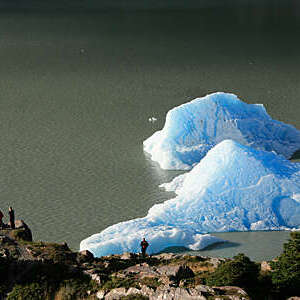 ISO is collaborating globally to update and extend its climate change standards and help the world minimize and adapt to the effects of climate change.

There is now little doubt that climate change is happening. It is the major environmental challenge of the 21st century, and it affects us all. “The scientific evidence for warming of the climate system is unequivocal,” states the Intergovernmental Panel on Climate Change (IPCC). The group of 1 300 independent scientific experts from around the world concludes that there is a more than 90 % probability that greenhouse gases (GHG) such as carbon dioxide, methane and nitrous oxide, produced by human (anthropogenic) activity, have caused much of the observed increase in Earth’s temperatures over the past 50 years.

Our world is getting hotter, and we can see the evidence in loss of sea ice, accelerated sea level rises, warming oceans, more intense heat waves, and an increase in extreme events such as wildfires, drought, tropical storms and floods. Why is this happening? In its Fourth Assessment Report, the IPCC states that most of the current global warming trend is human-induced – much of it from burning fossil fuels in power stations and in our cars – and is proceeding at a rate unprecedented in the past 1 300 years.

The Annual Conference of Parties (COP21) is taking place from 30 November to 11 December 2015. The United Nations Framework Convention on Climate Change (UNFCCC) has resolved to achieve, “for the first time, in over 20 years of UN negotiations, a legally binding and universal agreement on climate from all nations of the world ”, with the aim of keeping global warming below 2 °C by the end of the century – an agreement seen as crucial by the scientific community who advise that warming above 2 °C is likely to lead to catastrophic and irreversible weather events.

Since, as seems most likely, we humans are causing much of the increase in GHG emissions that are damaging our planet and threatening our futures, we must find urgent ways to reduce GHG emissions and mitigate the effects. GHG mitigation is the subject of an extraordinary global effort that transcends individual nations and governments. It is also the greatest test of international collaboration that requires standards and common practices for greatest effect.

“Never a greater need for standards”

ISO has a range of International Standards (see infographic above) that provide essential tools to help organizations mitigate their impact on the environment, including the ISO 14064 family for measuring, reporting and verifying greenhouse gas emissions. Developed by ISO technical committee ISO/TC 207/SC 7 and first published in 2006, it has become widely used for guidance in GHG management.

Today, approximately 40 0001) entities around the world quantify and report GHG emissions or removals (i.e. carbon sequestration) to comply with government regulations, participate in emissions trading markets or to demonstrate leadership in corporate social responsibility. They achieve GHG emissions reductions in a number of ways, including technologies and policies for energy efficiency, low-carbon energy, renewable energy and green buildings, for example.

But standards must move with the times, so ISO is revising its core GHG standards in an extensive review process that will affect the future of carbon management globally. “As the international approach to climate solutions becomes more driven by ‘bottom-up’ climate actions such as INDCs2) – intended nationally determined contributions – there’s never been a greater need for a robust, cost-effective and credible international standards system to support GHG measurement, reporting and verification,” says Tom Baumann, Chair of ISO/TC 207/SC 7, and Director of Knowledge Management at the Greenhouse Gas Management Institute (GHGMI).

Baumann led development of an extensive strategic plan for ISO/TC 207/SC 7 as a roadmap for coordinated standards development on mitigation and adaptation. Stakeholders clearly indicated strong interest in participating in the efforts to develop a better global standards system for climate actions. “Recognizing the demand to develop climate standards with global scale and speed to market, ISO members are using innovative tools and collaboration strategies to engage stakeholders at local and global levels,” he adds.

“It’s time for the next-generation standards collaboration” was the theme of an official UNFCCC side event to COP21, led by Baumann and the Climate Change Coordinating Committee (CCCC) for ISO and GHGMI, with the aim of learning from past standards-setting activities to align future action. The meeting concluded that the development of new climate standards would need to address important new areas of climate neutrality and resilience, and resolved to build alignment and collaboration between standards-setting bodies to fill climate-related standards gaps.

Blueprint for the future

The path forward is the work of the CCCC, set up by ISO in 2013 to blueprint the future roadmap to ISO standards for climate change mitigation and adaptation – not only to help the world reduce the effects of GHG emissions, but also to help us adapt to the effects of global warming.

Tod Delaney, Chair of the CCCC, says his committee recognizes that the magnitude of the global impact of climate change is only just beginning to be understood, and since great uncertainty surrounds the extent of these impacts, there is a need for ISO to have a structure in place that can meet current and future climate change challenges.

“We have recommended ongoing process changes as well as standards development. This includes our recommendation to set up a permanent CCCC-like committee to ensure evolving climate change challenges are addressed appropriately in standards development, and also that this committee is noticed for all ISO’s work on standards with climate change components so that all such standards can be harmonized. Both issues are expected to become more and more critical as the climate warms,” he says.

The CCCC will present its final report of findings and recommendations to the ISO Council on 31 December 2015. Michael Leering, ISO/TMB/CCCC Secretary and Program Manager of Environment and Climate Change at CSA Group, said, “our goal is to make ISO standards relevant and directly applicable to global climate change issues and INDCs so they can support the reduction of anthropogenic emissions, and the application of best practices. We have worked over the past two years to address the mandate given to us by the ISO/TMB to review the existing state of the art in ISO climate change standards, and assess stakeholder needs”.

The new data has helped clarify what is needed from ISO standards going forward. Leering explains: “Our work has resulted in several key recommendations regarding how ISO could address climate change by filling gaps, and by identifying and implementing collaboration with the key international organizations on climate change to increase the acceptance of ISO GHG standards globally.”

UNFCCCʼs support, and its work with the CCCC on the scope of the COP21 meeting in Paris, was an early example of this collaboration. The committee will also coordinate closely with the European Committee for Standardization (CEN), the World Bank, CDP, WRI and WBCSD, and the Gold Standard.

ISO/TC 207/SC 7 has embarked on a strategic planning process to focus resources on areas of highest priority for GHG standardization. More GHG standards are planned to meet market and stakeholder needs, prompted by the CCCC review, including a new initiative on climate change adaptation standards.

ISO’s core GHG standards are also being revised to add greater value and make them fit for the future, with a heightened focus on higher-quality GHG measurement, reporting and verification activities at many levels. And as low-carbon development planning becomes more important, new GHG methodologies will be needed to assess low-carbon policies and associated programmes and technologies, particularly for developing countries seeking support for low-emission development strategies and the capacity to implement ISO GHG standards.

Also key will be sector-specific standards for adaptation implementation guidance to support the substantial resources required to make social and economic systems resilient to climate change impacts. The top priority sectors are food and agriculture, and the water, energy and transportation infrastructures.

These initiatives are part of ISO/TC 207/SC 7’s strategic plan to develop standards to manage and mitigate GHG emissions, as well as to adapt to the effects of climate change and support sustainability. It states: “The primary purpose of ISO/TC 207/SC 7 is to develop standards to harmonize the practice of, and reduce the cost of, GHG mitigation and adaptation to the effects of climate change.” Ultimately, ISO GHG standards are expected to be one of the solutions to achieving the overarching benefit of a safe climate.

However, to have any sort of beneficial impact, it is vital that ISO’s GHG standards are successfully implemented worldwide. The point was dramatically expressed at the Delhi meeting of ISO/TC 207/SC 7 last September: “Mitigation and adaptation are inextricably linked because, simply stated, a failure to aggressively pursue mitigation through GHG reductions will inevitably translate to the need for a greater degree of adaptation to climate change impacts.” Importantly, SC 7 now has a new work item proposal (NWIP) ballot open for a “high-level framework standard on adaptation”.

ISO/TC 207/SC 7 is also developing an important new guidance standard – ISO 14080 – which, says Chikako Makino, GHG Programme Manager at the Japan Accreditation Board, Co-Convenor of ISO 14080 and Member of the CCCC, will provide those involved in climate action with a framework for consistent, comparable and improved methodologies to guide effective mitigation and adaptation activities, and also improve access to, and availability of, climate finance and other resources.

Approximately 40 000* entities around the world quantify and report GHG emissions or removals.

Massamba Thioye of the UNFCCC Secretariat, who has been closely involved in the development of ISO 14080, says the development by several standards-setting bodies of methodologies without harmonization can result in a fragmented, complex and uncoordinated landscape of standards, programmes and guidance documents. In his opinion, ISO 14080, if aligned with UNFCCC standards, could play a pivotal role as a process standard, in bringing consistency across future methodologies regardless of which organization develops them.

“In my view, there is a huge need for development of standards like these to facilitate ‘comparability’ of methodological approaches that different stakeholders use for quantification of emissions reductions. ISO 14080, if well developed by taking the evolving climate change architecture post-2020 into consideration, will have an enormous potential and will lay the foundation for establishing similar frameworks by different stakeholders.”

Noer Adi Wardojo, Vice-Chair of ISO/TC 207/SC 1 and Leader, SC 7 Ad Hoc Group on NWIP for GHG methodologies, picked up the theme of World Standards Day 2015 – “Standards: the world’s common language” – in describing the value of the new GHG guideline standard ISO 14080, and in contemplating a world without ISO GHG standards.

“In stressing the importance of ISO 14080, we should also consider the downside of the standard not being in place – the consequence being a high risk of mismatch among climate actions and methodologies.” He sees achieving global consensus by all GHG actors as one of the major accomplishments in developing ISO 14080. “It is really great to have ISO, UNFCCC, the World Bank, WRI, WBCSD, the Gold Standard, developed and developing countries, and many GHG players, collaborating in ISO 14080 to agree a common language.”

2) In the lead up to the 2015 United Nations Climate Change Conference, countries were asked to publicly declare what actions they intend to take (INDCs) under a new global agreement, through which they put forward their pledges in the context of their own national circumstances, capabilities and priorities, within the ambition to reduce global greenhouse gas emissions sufficiently to keep global temperature rise to 2 °C.

Seasons are shifting and temperatures are climbing, threatening to deprive us of the very things – air, water, food and a safe place to live – we depend on for survival.