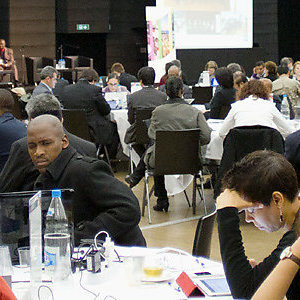 As the ISO 26000 guidance standard on social responsibility (SR) reached its second anniversary, ISO Secretary-General Rob Steele challenged participants at a two-day open forum in Geneva, Switzerland, to consider what has been done so far, and where the road should take us next, by asking, “So what ?”

The ISO 26000 forum, organized by ISO in November 2012, was an opportunity to share experience, best practice and lessons learned, as well as highlight areas for improvement.

“I get to see a lot of interesting people who are trying to change the world,” exclaimed ISO Deputy Secretary-General Kevin McKinley, as he welcomed some 300 participants and more than 50 speakers from the private and public sectors, including national standards bodies.

Mr. McKinley explained that the forum’s objective was to provide ideas to ISO on the use and possible future of ISO 26000. It would not decide amendments to the standard, or add new projects to ISO’s work programme. But participants’ ideas could be shared with the former joint secretariat of the ISO Working Group on Social Responsibility, comprising ISO members SIS (Sweden) and ABNT (Brazil), and through them to the ISO 26000 Post Publication Organization (PPO) for advice.

Opening the event, Rob Steele declared: “All ISO standards are developed following the principles of transparency, openness, impartiality and consensus, effectiveness and relevance, coherence, and following the development dimension. ISO 26000 is no exception.”

Mr. Steele invited participants to join in a constructive dialogue, and encouraged everyone to “ensure that facts and real-life experience support our discussions on ISO 26000 and its future.”

Resulting from the efforts of over 400 experts and 200 observers from 99 countries and 42 international organizations, ISO 26000 was developed with a wide stakeholder, regional, and gender balance. The guidance standard is not a management system, or intended for third-party certification, but “It’s good enough to help meet the economic, environmental and societal challenges of a changing world,” said Jorge Cajazeira, Chair of the ISO 26000 PPO, as he described how many documents and initiatives are now based on the standard.

Keynote speaker, Carlos Alberto Griner, Chief Human Resources Officer, Suzano Pulp and Paper, explained why the company uses ISO 26000:  We operate in a complex environment, in multiple cities, in a diverse context, and believe that the best way to keep our business running is to balance the three aspects of the triple bottom line [economic, environmental and social sustainability].”

When constructing one of the world’s most modern eucalyptus market pulp mills in the poorest state in Brazil, the company opted for working with the local community, rather than bringing a workforce and talent from outside. The result was that 60 % of the people involved were from the region, and more than 5 600 professionals were trained.

“Listening to what society is doing is key to taking sustainable actions in the future,” he said, “and ISO 26000 helped us do just that.”

Kristina Sandberg, ISO 26000 PPO Secretary, highlighted the growing interest of ISO 26000 around the world. A survey conducted by the PPO showed that at least 60 countries have adopted the standard, and 20 more are in the process of reviewing for adoption. In addition, the text is now available in 22 languages. Other aspects of ISO 26000’s global use were highlighted, including the issue of certification which has generated a lot of debate. On this point, the survey showed a mix of responses for and against the idea.

During a workshop for developing countries (see Box below), participants agreed that use of the standard could bring several benefits, including :

The biggest challenges for implementation were lack of awareness, resources and understanding. Initiatives are underway to address these issues.

Some 120 participants from about 70 countries exchanged experience on ISO 26000:2010, Guidance on social responsibility, at a workshop for developing countries organized by ISO’s Development and Training Services (DEVT) in November 2012, in Geneva, Switzerland.

ISO Secretary-General Rob Steele said: “This is the first time ISO has organized such an event on one specific standard and it shows the importance and relevance of the standard to developing countries.”

He underlined that during the ISO 26000 development process, the involvement of developing countries was very important, with over 40 % of experts.

Beer Budoo, Director of ISO DEVT, declared: “The objectives of the workshop are to share the experience, discuss the way forward for NSBs, and equip them with ideas, information and tools to develop action plans to ensure the further uptake of ISO 26000. This is a dynamic situation in which NSBs have a central role to play in the way forward.”

He quoted some activities linked to ISO 26000, such as the project within the Middle East-North Africa region with the objective of creating a pool of national experts on social responsibility in eight pilot countries to support its implementation.

Dr. Jochen Weikert, Senior Manager for private sector cooperation at the Deutsche Gesellschaft für Internationale Zusammenarbeit (GIZ), on behalf of Germany’s Federal Ministry for Economic Cooperation and Development (BMZ), said: “We have supported ISO 26000 for the last two years because of its importance. With ISO 26000, there is a global consensus and we believe this consensus has to be maintained.”

This workshop was sponsored by GIZ and the Swedish International Development Cooperation Agency (Sida).

Staffan Söderberg, Vice-Chair of ISO 26000 PPO, drew attention to how consultants, National Standards Bodies (NSBs), policy makers and various organizations are using ISO 26000 in activities, policy guidance and numerous documents promoting SR. In academic circles, 3 000 articles and 50 books, as well as many doctorates, are based on the standard.

But Mr. Söderberg stressed, “Tools supporting ISO 26000 must be stakeholder- based, comprehensive and transparent.”

However, Mr. Söderberg warned that there were also “bad examples” where organizations claimed to be “certified” or used other conformity assessments terms.

During the conference, panellists from around the world, representing industry, international and non-governmental organizations, NSBs, consumers, academia and other stakeholders, discussed their experiences with ISO 26000, highlighting the biggest challenges as well as future opportunities.

Contributors agreed that use of ISO 26000 promoted transparency and communication, and helped build trust with stakeholders. For example, following the standard, the Swedish housing cooperation (HSB) trained all employees on human rights, and engaged in dialogue with local stakeholders. Cecilia Lööf, PR manager at HSB’s Göterborg-Division, said that the latter actually helped complete projects faster, concluding that, “Working with ISO 26000 can also result in business development and good economic results.”

Like any other good idea, however, people first need to know that it exists. AFNOR, ISO member for France, has a dedicated Website among other awareness-building initiatives. In a similar spirit, Indonesia has launched a corporate social responsibility award for companies. The Global Reporting Initiative (GRI) has developed a linkage document stressing the many similarities between its own guidelines and ISO 26000.

Participants concluded that to improve global use of ISO 26000, it was necessary to harmonize and increase communication, as well as develop useful guides and case studies to make the standard more accessible.

The good, the bad and the ugly

Participants agreed that ISO 26000 brings many important benefits. Notably, it represents consensus on what we mean by social responsibility. Dwight Justice, Policy Advisor at the International Trade Union Confederation, said that the standard was the “most comprehensive and concise guidance of what an organization should do - for that reason I think it’s extremely useful.” It constitutes a “very concise agreement of what responsible behaviour is for organizations”.

On the one hand , NORMAPME (European Office of Crafts, Trades and SMEs) argued that from the perspective of SMEs, the document might be too long and complex. On the other hand, Dante Pesce, Executive Director of Vincular, explained that ISO 26000 provides a comprehensive overview from which organizations can select what is relevant to them. “Most people that read it for the first time think they have to comply with everything, and that frightens them. After you break that barrier, my experience is that it is extremely practical,” he said.

A difficulty expressed by various panellists was that organizations need to show results from their SR activities, and called for guidance on self-assessment, statements and reports. NEN, ISO member for the Netherlands, presented its national initiative on self-declaration recommendations.

Prof. Sri Ram Khanna, Department of Commerce from the University of Delhi, emphasized the challenges that Indian consumers face when the primary goal of companies is making profits.

“Most company SR reports are like bridal make-up,” he said, meaning that they hide or “dress up” the real picture. If the goal is to have a verification system for ISO 26000, this should involve transparent multi-stakeholder engagement.

Another argument was that ISO 26000 can only take us so far, and that public policy and regulations are necessary for SR enforcement.

Sadie Homer, Senior Policy Advisor, Consumers International (CI), appreciated how consumers were respected and recognized as key stakeholders in the development of ISO 26000. Regarding the challenges, she said, “We have to improve recognition of ISO 26000 before we take on other issues ”.

As participants were asked to picture the future, many saw a role for ISO 26000.

“We are starting to realize the importance of SR for due diligence in mergers and acquisitions,” said Anthony Miller, Economic Affairs Officer, UN Conference on Trade and Development. “Organizations must be aware of what they are really getting.”

Osama Elmeligy, Chairman of TOTAL Consulting, Egypt, highlighted the rapid and unpredictable challenges faced by his country, and the potential for ISO 26000 in helping to cope with change.

Red Puentes, a Latin American network of over 40 NGOs was also hopeful of the positive role the standard can have in shaping the future.

The new government of Denmark, as well as the Nordic Council of Ministers, have both recommended the use of ISO 26000 as part of their SR strategies.

Clearly, there is a trend towards increasing national adoption and interest, but perhaps the biggest challenge we face is that of expectations : do all organizations really want a sustainable world ?

Kevin McKinley recognized that the past two days had been exciting and intense. Whether an NGO, business, government or consumer, it was clear that ISO 26000 was important enough to raise passionate debate.