As smooth as silk 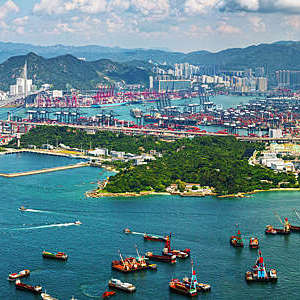 China’s plan to revive and rebrand some of the world’s most travelled trade routes as the Belt and Road Initiative has resulted in the largest infrastructure project ever attempted. It’s clear that successful construction, management and operation of this 21st-century trade superhighway will depend on hundreds of international standards, but they also have a less obvious role in weaving the intricate tapestry of global trade relationships.

In April of this year, the government of China hosted the Second Belt and Road Forum for International Cooperation in Beijing. China’s President Xi Jinping, a driving force for the Belt and Road Initiative (BRI) since it was initiated in 2013, welcomed leaders from the many countries that are interconnected by the BRI. Key international organizations, including ISO, were also in attendance.

An overarching theme of the Forum identified the need to enhance the rules, procedures and international standards that provide the foundations of the entire initiative. While the use of international standards is widely understood in terms of product conformity, it was noted that they also serve as a tool for regulators tasked with developing trade policies. Addressing the delegates, ISO President John Walter joined the dots between international standards, global cooperation and smooth trade on the new Silk Road.

“One of the objectives of the BRI is to enable the movement of people and products. People are required to have correct documentation to move freely across jurisdictions. So products must also meet standards imposed on them by both competent authorities as well as demanding consumers.

Together or not at all

Like most human interactions, economic value is created at the moment that an exchange takes place. Random thoughts crystallize into ideas when we express them to others; words become conversations; the best ways of doing things become standards; and exchange grows into trade, which is the driver of the post-globalization economy.

One person who can shine some light on the entanglements between standardizers, regulators and business is David Henig, Director of the UK Trade Policy Project at the European Centre for International Political Economy (ECIPE). A leading expert on the development of UK trade policy who is heavily involved in the discussion of standards, conformity assessment and regulatory alignment in trade agreements, he co-founded the UK Trade Forum, which brings together UK trade policy experts to debate, analyse and develop solutions.

What does Henig regard as the role of standards in supporting trade? “We see greater trade where countries agree to use the same standards or regulations,” Henig begins. Pointing to both the complexity of the interactions and the need for further research, he adds that while “this hasn’t been comprehensively studied as yet, the impact seems clear”.

Businesses adopt a similarly practical attitude to standards, though an empirically based case for the multiplying effects of standards on trade will be a welcome output from ISO’s research and innovation department. The unit was recently established to examine the impacts of international standardization on trade and other economic, social and environmental factors. The department hopes to complement anecdotal understandings of standardization impacts with a strong evidence base. Even when it comes to assessing the impact of the BRI on trade so far, reliable figures are hard to come by but it’s clear that the initiative is leading to growth in both imports and exports. For example, in 2017, the import and export volume between China and countries along the BRI reached USD 1 440 billion, up 13.4 % from 2016 and accounting for 36.2 % of China’s total import and export trade.

Like a game of tennis, a structured debate, or even a high-five, such trade cannot happen if we don’t agree to do it together. (Try it: You’ll end up doing a lot of running and attract perplexed glances.) In all these cases, limits have been set, the rules of the game that allow us to interact effectively. Yes, it can be frustrating to hit a great shot that is just on the wrong side of an “arbitrary” white line, but ignore it, and play breaks down. “Driving effective cooperation is just one of the reasons that China sees standardization as having an essential, strategic position in the Belt and Road Initiative,” Henig points out, a fact explicitly highlighted in the BRI Leading Group’s publication Action Plan on Belt and Road Standard Connectivity (2018-2020).

In addition to bringing further alignment of Chinese standards with international standards and facilitating communication along the entire Belt and Road system, the Plan identifies standardization as the most effective way to promote the interconnection of policies, facilities, trade, funds and public perception.

Let me address the ultimate question – Do standards present barriers to trade? To engineer and build a product that conforms to an accepted level of performance and safety requires more effort, and money, than one that is inconsistent and shoddy. Personally, I’m as comfortable with products that aren’t made using standards as I would be standing on the deck of a pitching ship with no railings.

But perceptions are important. For example, the term “barrier” carries negative connotations in a society that equates freedom with the notion of doing whatever, wherever and whenever we feel like doing it. But when I try and pull a psychiatrist’s trick on myself and list the first things that come to my mind when I say “barriers”, there are only positive associations. Whether it’s the Armco crash barrier that reduces head-on motorway collisions, the thigh-crushing bar that stops people falling from roller coasters, or the giant coral reefs so loved by fish and scuba divers, barriers are not all bad.

Having established that barriers are desirable in the right places, questions remain: When it comes to something as entangled as trade, who can say where those places are? Importantly, where are the wrong places? Which barriers are cumbersome, unnecessary obstacles, and which help us set the ground rules for a game that, played right, benefits everyone?

Henig’s work at ECIPE is rooted in the classical tradition of free trade and an open world economic order. He was heavily engaged in the Transatlantic Trade and Investment Partnership (TTIP) throughout the three-and-a-half years of, now stalled, negotiations, working with both sets of negotiators to develop ways forward particularly on regulatory coherence, technical barriers to trade (TBT) and sustainable development.

This provides an opportunity for me to ask him how TTIP and similar deals, such as the Comprehensive and Progressive Agreement for Trans-Pacific Partnership (CPTPP), relate to infrastructural and investment projects such as the BRI. Do they also rely on standards, for example, or are standards perceived as having a limited role? Are these deals just two sides of the same coin?

“TTIP and TPP [now rebranded as CPTPP] have significant technical differences but exist to achieve similar goals. In both cases, the challenge is to remove barriers to trade, which, in many cases, are forms of protectionism that circumvent low or non-existent tariffs covered by the agreement,” Henig says. “While they represent different geopolitical perspectives, they share similar objectives.” It stands to reason. After all, they are founded on the common principle that unnecessary barriers to trade should be removed.

The tariff side of things is dealt with in the agreement, and so the focus is on those technical aspects that serve, intentionally or otherwise, as a brake on trade. Henig says: “Mutual recognition of conformity assessments, or use of international standards, or discussions on alignment of regulations, are becoming an increasing part of trade discussions such as TPP and TTIP. As it is with the BRI. While not yet mature as a discipline, it is an encouraging step forward.”

He points out that while TTIP and CPTPP relate to Europe and the Pacific Rim respectively, the US is one of the focal points of trade. In both cases, protectionist barriers are to be avoided. It’s standards that serve to keep differing national trade priorities from descending into acrimony or outright trade war, a point that was amply underlined by Ambassador Alan Wolff, one of the Deputy Directors-General of the World Trade Organization, when he spoke at the ISO General Assembly last year.

The BRI is redefining trade relationships. It blurs regional and cultural boundaries in pursuit of a unifying aim, that of putting the infrastructure in place to simply let trade happen. As part of a long-term plan to raise the standard of living in China, the economic perspectives and social objectives are quite different from formalized global agreements, with about 60 partner countries carrying their own expectations to the Initiative. Yet the founding principle, that trade is our best way of creating and sharing value, is universally agreed.

One of the discoveries that led to the development of the original silk roads was that the cocoons of the Bombyx moth are tightly wound from one of the finest fibres imaginable. Like many of the ancient discoveries, the origins of silk have been embroidered with myth and storytelling. Sitting beneath a mulberry tree and sipping tea, a cocoon falls into Empress Si-Ling Chi’s cup, where it begins to unravel in the hot liquid. Instructing one of her attendants to take the end of the thread and to walk until it is entirely straightened, she found herself in open countryside almost a kilometre away before she stopped.

Whilst the story is fanciful, we do know that the discovery of silk led to a period of economic growth for China. Its luxurious products were valued throughout the world and this development stands as a testament to the power of curiosity and innovation. But the route was ultimately responsible for far more than silk. A driving force behind the expansion of the Han Empire, it also brought paper, writing, Buddhist thought and gun powder to new countries. If the main role for government in those days was fending off bandits, at the same time as using the road to achieve their own expansion and conquest, today’s leaders see it as a unifying force. The BRI is an opportunity to develop strength in unity – threads that are fragile, taken individually, can be woven into a tissue of extraordinary strength.

Keeping the loom of world trade running smoothly, and profitably, is a priority for ISO. The global economy obeys its own dynamics and is notoriously defiant of pundits’ predictions; that’s why the ground rules are so important in managing risk. By enabling a degree of stability and setting common expectations, international standards enable companies to innovate and compete, nurturing economies. Henig concludes: “Businesses need the certainty that standards can bring within a complex regulatory framework. This is even more the case if the standards are truly international and can apply across borders.”

Need to keep pace with the trends in trade? This is a must-read to stay abreast of critical standards issues and trade trends, today and tomorrow.
Barnaby Lewis
Elizabeth Gasiorowski-Denis
Editor-in-Chief of ISOfocus