Missing persons and refugees – a new target for standardization? 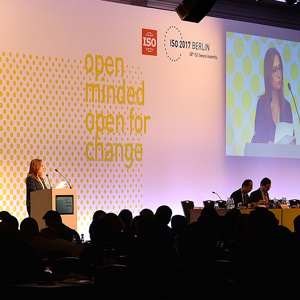 By the end of 2016, over 65.6 million people worldwide were uprooted from their homes by conflict and persecution. Not only has this resulted in human suffering for those fleeing, but it has also created an important burden on host countries. At this year’s meeting of the ISO Committee on developing country matters (DEVCO), guest speakers from the International Committee of the Red Cross (ICRC) and the Lebanese foreign ministry explored whether ISO’s standards setting expertise could support the development of solutions for humanitarian work.

Missing people and the Red Cross

“It will not come as a surprise that ISO standards are regularly used in the work of the International Committee of the Red Cross (ICRC),” said Prof. Jürg Kesselring, Chairman of the ICRC MoveAbility Board at the DEVCO meeting. The event, which brings together ISO members from around the world, explores how the ISO community can better support developing country needs and its members from developing countries.

Standards are helping the ICRC to improve efficiency and outreach, according to Prof. Kesselring. “When a product, activity or service meets ISO standards, there is a general expectation that it will be delivering what is expected from it. This applies to relief items, manufacturing, record management systems, hospital design, engineering, etc.” He highlighted, as an example, the series of ISO standards on societal security, which can be applied to mass evacuation and community resilience – subjects which are important to the ICRC. “In health or forensic fields,” he added, “authorities often refer to validation and routine control done in accordance with ISO standards in order to show the seriousness of their processes.”

But Prof. Kesselring believes there is more that can be done. He believes the ICRC, with its field experience and network, could collaborate with ISO and its members to develop standards for the humanitarian field, especially in the area of missing persons.

“Imagine saying goodbye to a loved one and not being able to say hello again,” said Prof. Kesselring. “The trends are appalling. People who go missing remain one of the most damaging humanitarian consequences of past wars.

“The ICRC firmly believes that the development of standards and the standardization of practices in the field of the missing can be an effective vehicle to provide a better quality and rate of answers, including on the fate and whereabouts of the missing.”

So what would this involve? According to Prof. Kesselring, this could include reflecting on standards related to identification, collection, management and protection of relevant data, including big data, in addition to the dignified management of the dead and the processes related to identifying remains.

“One organization cannot do it alone,” concluded Prof. Kesselring.

Lebanon and the refugee crisis

According to the United Nations Refugee Agency, 84 % of the world’s refugees are hosted by developing countries, said Alia Aoun, Senior Legal Advisor on Humanitarian Affairs at the Ministry of Foreign Affairs of Lebanon, the middle-income country hosting the biggest number of refugees per capita and by square kilometre.

“I propose to provide some food for thought by exposing the situation in Lebanon in order to identify the gaps and to reflect on existing mechanisms,” she said. “One out of every three persons living in Lebanon is displaced or a refugee. We owe it to ourselves, and to them, to figure out how to manage and exit the humanitarian crisis.”

Lebanon’s emergency refugee plan covers basic assistance, education, food security, health, livelihoods, protection, shelter, social stability, energy and water. Although key United Nations partners provide important protocols and guidance in some of these areas, ISO standards address most of the aforementioned sectors but out of context of the refugee crisis. “Maybe we should aim for a combination of both approaches, naturally under the umbrella of the norms of international law,” she concluded.

For Ms Aoun, standardization is a way of putting in place practical solutions that are reproducible and harmonized, which could help host countries in their response to many of the issues they face when helping refugees.

The ISO DEVCO meeting is part of the ISO Week in Germany, a week of meetings including the annual ISO General Assembly, which takes place in Berlin from 18 to 22 September 2017.  The theme of the week is “Open Minded. Open for Change”, which is an invitation to the ISO community to look to the future through four key themes – exploring future standardization needs, the use of new technologies, collaboration with other organizations, and attracting a new generation of standardizers.