Towards a circular economy

Catherine Chevauché is leading the charge on the circular economy. Here, she explains the scale of the challenge and how we can rise to it. 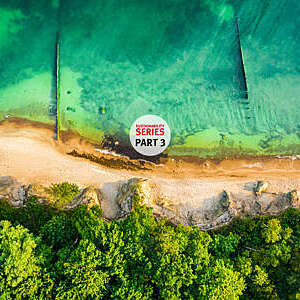 The circular economy is considered a pillar of climate action. As opposed to the linear model of production and consumption which evolves along the stages of “take, make, dispose”, circularity aims to minimize depletion of raw resources by reusing and reducing waste, water and energy. For the first time, a set of International Standards for the circular economy – which define it, set out how to transition to it, and how to measure success – is being written.

Chevauché was working to establish the circular economy long before it became a well-known concept. Her background spans standards and sustainability, working with corporations and local government to ensure that heat and wastewater can be captured and reused. At Suez (and prior to its merger with Veolia), she has been developing an organization-wide strategy to halve greenhouse gas emissions by 2030 in line with international climate targets.

The possibility of working with ISO arose when the French government proposed establishing a set of International Standards for the circular economy – and she jumped at the chance. “I was very interested in this job, because I am deeply convinced that we have to find an alternative way of production and consumption to tackle climate change,” says Chevauché. Now, she is leading the development of ISO standards that aim to help organizations “think of waste as a resource”.

Chevauché proposed a different approach to drafting a new package of standards. She believes the committee must act urgently in response to the environmental “emergency”. Therefore, rather than drafting the three standards one after the next, she is working with ISO to have the standards drafted in parallel. The first defines the principles of the circular economy; the second explains the transition from linear to circular business model for organizations; and the third sets out how to assess circularity at different levels. ISO is supporting the development of this full package of standards within an accelerated time frame of three years. “ISO understands the urgency to act and has been very supportive,” she says.

Chevauché knows it will be a challenge to align dozens of countries behind the new standards package in just three years. Also, the circular economy is a relatively new concept with limited real-world implementation – the latest Circularity Gap Report found that we reuse just 8.6 % of resources that we extract from Earth.

Transitioning from a linear to a circular economy means asking organizations to change the principles on which they have been operating since the industrial revolution. “The circular economy is really a new paradigm which is not easy to implement because it changes a lot of things within an organization’s life,” she says.

ISO understands the urgency to act.

Getting all on board

In leading the work, Chevauché has emphasized the importance of ensuring that the standards are fair and relevant to all countries by having a geographical spread of representatives in leadership roles. A total of 89 countries from five continents sit within the technical committee and many are expected to attend the next meeting that will be held later this year in Kigali, Rwanda. “I am really convinced that we have to push and involve as many countries as possible,” she says. “We try to put people together to encourage them to think and act together.”

Chevauché believes international collaboration is key to drafting a suite of standards for the circular economy. She is focused on aligning experts and getting the package of standards published by early 2024. “We have to put on the table something new, something worthwhile,” she says. “The global community needs us to take action towards creating a sustainable and environmentally sound future.”

Once the standards have been published, she says, ignorance about what the circular economy is and how it works will no longer be an excuse for organizations not shifting away from the unsustainable linear model of production and consumption. The challenge ahead is considerable – but this will be a milestone in the transition towards circularity.