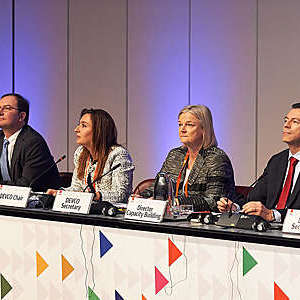 At the 2018 ISO Week in Geneva, the ISO committee dedicated to developing countries, DEVCO, unveiled ambitious plans to reduce inequalities and continue spreading the benefits of International Standards where they’re needed most.

At the 52nd ISO DEVCO meeting, participants were roused by the words of guest speaker Christine Loew, Director of the UN Women Liaison Office, Geneva. Loew addressed a number of topics related to global inequality, and the role of women. Her speech drew attention to the fact that under-representation of women perpetuates further inequalities in wider society.

“When [women’s] lives are improved, the benefits reverberate across society,”  says Loew. She cited the ways in which inequality pays compound interest, “women and girls bear the greatest burden of energy poverty – gathering fuel for an average of 18 hours per week”, with a knock-on effect of lower school attendance than their male counterparts.

Unfortunately, it doesn’t end there. With women generally doing the majority of the cooking, in conditions that are detrimental to their health, thousands die prematurely from respiratory illness. While praising standards such as cleaner-burning stoves, and pointing to ISO’s positive gender representation in some areas, Loew underlined that more could be done to involve female experts in the standards development process.

Loew’s comments echoed the views of ISO’s Secretary-General, Sergio Mujica, an International Gender Champion who has placed diversity and capacity building at the heart of ISO’s work. His strong belief in the role of standards in building a fairer society was clear, and will be echoed throughout other events during the ISO Week 2018. Speaking on the United Nations Sustainable Development Goals, Sergio Mujica @isosecgen said “we can contribute to making the 2030 Agenda a reality, so no one is left behind”.

A series of breakout sessions looked at future challenges, including stakeholder engagement focusing on small- and medium-sized businesses; standards and public procurement; and teaching standards in higher education.

The ISO President, John Walter, who opened the DEVCO session, used the opportunity to express thanks to the Swedish International Development Cooperation Agency, Sida, whose generous funding has enabled a number of capacity building and technical assistance programmes. Walter also recognized the considerable efforts of Lena Dargham, whose hard work and dedication contributed to her re-election as Chair of DEVCO, which was announced at the meeting.