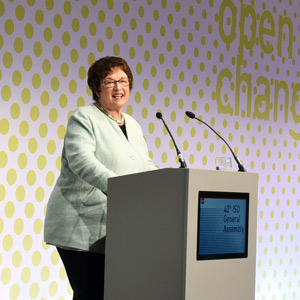 “The success of International Standards is a good example of the benefits international cooperation can bring,” said Brigitte Zypries, the German Federal Minister for Economic Affairs and Energy, at the ISO General Assembly in Berlin, Germany. Ms&nbspZypries went on to congratulate the organization for the work it is doing to support international trade.

Although today we are seeing increased criticism of open markets, she continued, the answer is not “isolation”. Ms Zypries instead emphasized the importance of making globalization fair. “International Standards can help achieve this, particularly when they offer a high level of protection for workers, consumers and the environment,” she said.

The Minister also underlined the key, but often hidden, role that International Standards play in daily life. “The first ISO standard was published in 1951, and there are now more than 21 800 standards. These figures reflect an impressive productivity rate. But the figures themselves only tell part of the story. They don’t show the important role played by International Standards in our day-to-day lives, and how much more complicated our lives would be without them.”

International Standards: a mirror of their time

In addition to underlining the importance of international standardization, Ms Zypries drew attention to how standards reflect society’s needs, stating that they are “a mirror of the needs of their time”.

“The industrial revolution and the growing use of machinery resulted in a great need for technical standards,” she explained. But later, in the second half of the 20th century, the growth in trade of goods led to new needs, such as those for freight containers, and much later still, standards in fields like quality and environmental management.

“Today, at the beginning of the 21st century, the focus is on digitization. Smart cities, smart grids and smart mobility: these are the trends that will define our future,” she said.

Ms Zypries’ thoughts on future standardization needs were echoed by keynote speaker Prof. Peter Post, Head of Applied Research at the automation company Festo, who emphasized the crucial role of standards for Industry 4.0.

Prof. Post gave an insider’s view of the production systems of tomorrow, explaining that today’s three major trends include customer-specific production, sustainability, and digitization and networking, which, together, are revolutionizing the future of manufacturing. For Prof. Post, this means an industry sector that is “modular, adaptive and sustainable, lean, clean and green”.

Standards are needed to make this a reality, he argued. “To be sustainable, and to make solutions that work on the shop floor with safety and security demands, we need standardization.”

While describing this very high-tech world, Prof. Post was keen to underline the role of humans in future production. “We do not think about production without humans. In future production facilities, humans are playing as important and central a role as they have in the past.”

He also described the kind of standardization that this would require, proposing the use of agile concepts to develop standards that will help respond quickly to a rapidly changing environment. “We have to find ways to bring the solutions that come from digitalization in good time into real life,” he explained. Finally, he noted that cooperation and coordination are essential to standardization and that the standards community must remain attractive to industry, so that it continues to send experts and support the technical work.

The annual ISO General Assembly brings together representatives from ISO members around the world. It is part of the ISO Week in Germany, a week of meetings that takes place in Berlin from 18 to 22 September 2017. The theme of the week is “Open Minded. Open for Change”, which is an invitation to the ISO community to look to the future through four key themes – exploring future standardization needs, the use of new technologies, collaboration with other organizations, and attracting a new generation of standardizers.