My take on Davos and the 4th industrial revolution 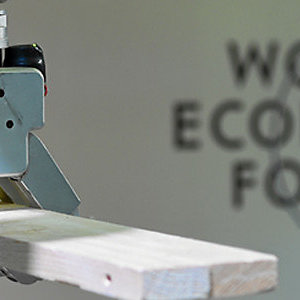 Walking the snowy streets of the small Swiss town of Davos, it’s impressive to know that 40 heads of state and 2 500 leaders from business and society are here to talk about some of the most important global challenges facing us today.

In the main congress hall, I see and meet leading political figures like UN Secretary-General Ban Ki-Moon, Queen Rania al-Yassin of Jordan, and the new Canadian Prime Minister Justin Trudeau. Leading business executives also mingle from Facebook, AirBnb, Nestlé, Monsanto, IKEA and many others. I see international organizations that are present in force, including Christine Lagarde from the International Monetary Fund and Jim Yong Kim of the World Bank. We also have stars here, such as Leonardo DiCaprio and Kevin Spacey, sharing their ideas as they come in from the cold! There is still another day and half left, but here are some thoughts on what I’ve seen.

The theme of this year’s World Economic Forum Annual Meeting in Davos is the “Fourth Industrial Revolution”. Back in the 1700s, the world was transformed by the invention of the steam engine, followed by mass production and, much later, electronics. Today, as innovative cyber-physical systems like robots, 3D printing and driverless cars break the boundaries of what we consider possible, we are on the verge of a new industrial revolution.

The implications of these developments are one of the main topics being debated this week. How will new technologies shape the world? Will the impact be felt more strongly in developing countries? What will it mean for the way humans interact? The point of these discussions, of course, is not to halt progress but to take stock and consider the new direction our world is taking, and what issues and challenges we may need to address. Stephen Hawking recently said that it’s a “near certainty” that technology will threaten humanity in the next few thousand years. If this is the case, the technologies that this revolution develops will need to consider the sustainable, long-term implications of their use.

Artificial intelligence and robots are interesting examples and have certainly captured our imagination in books and films. But some of this fiction is already becoming real. I discussed with History Professor Patrick McCray about the contribution standards will make in this new industrial era. History shows that making progress in this fourth revolution will require new global standards. They not only have a key role in opening up opportunities, but also in setting expectations, boundaries and limits.

An excellent example of the relationship of standards and innovation is ISO 13482 on the safety of personal care robots. This standard was a landmark for the industry at a time when no other guidance existed for manufacturers, simply because experience with the technology was lacking. Without some kind of standard, however, many industry players were not willing to invest millions into a product that may not be accepted because of safety or unknown new regulatory concerns. Today, we have a dedicated technical committee developing standards on robotics and providing greater certainty on the subject.

New technologies also carry new risks. One of the most alarming for organizations is cyber threats. During a cyber-security debate, House of Cards actor Kevin Spacey spoke about his fear of a repetition of last year’s Sony Pictures hack. For him, the hack was a wake-up call for everyone in his industry – in fact, any industry. He raised an important conclusion, cyber security and the protection of valuable intellectual property are key challenges for artists in today’s digital era. ISO is very active in this area, developing tools to help organizations set up a solid cyber-security infrastructure and response system.

Agree with @KevinSpacey about risk of cyber threats and need to protect valuable IP. #wef pic.twitter.com/ZpXSi4wST7

Another interesting conversation taking place at Davos relates to smart cities and infrastructures. Urban migration and the drive towards new technologies in cities will mean that implemented systems need standards to work together. Coherent standards will ensure the performance and protection of city assets, and the safety and well-being of citizens.

Achim Steiner, Executive Director of the United Nations Environment Programme, raises a parallel issue for the city of the future: it is predicted that global urban infrastructure will need to double over the next 35 years. So how do we make sure that we build sustainably? This year, ISO, IEC and ITU will hold a smart city forum that will engage city managers and other stakeholders to see how standards can support them on this road.

There have been many thought-provoking and inspiring discussions over the past few days. And there’s a potential role for ISO standards in so many places. Many leaders are unaware of the power and leveraging effect of standards in this fourth industrial revolution. But this is slowly changing. ISO standards are being seen by the enlightened as keys for market access and the propagation of new technologies. Without them, innovations simply cannot proceed at the desired exponential pace.

Standards are also repositories of the world’s best practice. They are a way of passing down solutions on complex global challenges to the people and organizations who need to address the issues. Great things happen when the world agrees, and the need for common global solutions from ISO will grow in pace with the need for new technologies and new solutions to support a truly sustainable world.