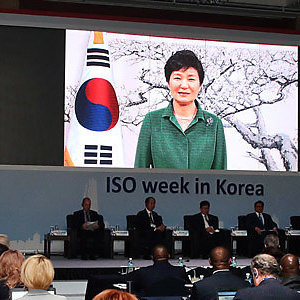 Since its foundation in 1947, ISO has made a vast contribution to global economic growth and quality of life, according to the President of the Republic of Korea, her Excellency Park Geun-hye.

Such were the words of the President, made via a video address during the opening ceremony of ISO’s 38th General Assembly in Seoul, Korea, on Wednesday 16 September 2015.

Her Excellency went on to note that the need for standards is escalating. “As we are living in an era of innovation, where technology and products are evolving at a much faster pace than ever before, the importance of ISO and international standardization is increasingly growing,” she observed.

The importance of standards in our fast-paced world was echoed by Mr. Yoon Sang-jick, the Korean Minister of Trade, Industry and Energy, who addressed participants during the ceremony. “Recently, the speed of technological development has gone beyond our imagination, with the development of information communication technology (ICT) as well as the convergence of technology from various industries,” he said, citing cutting-edge examples such as driverless cars and drones.

Mr. Yoon Sang-jick highlighted the role of standards in helping new technologies and products enter the marketplace and urged continued efforts to provide timely and flexible solutions. “I truly believe that ISO will take a pivotal role in building the prosperity of the world, leading technological development,” he said.

Corroborating these thoughts, the keynote speaker for the meeting, Dr. Koo Ja-Kyun, CEO and Chairman of LS Industrial Systems, a leading Korean energy and engineering company, observed that developments such as the Internet of Things and big data are leading to a paradigm shift in many industries including the energy sector, which is often thought of as relatively conservative.

He highlighted developments such as smart grids that help to open up the energy sector and to provide and use energy in a more efficient and environmentally friendly manner. “We need International Standards in order to help rapidly and effectively spread new technologies such as these,” he said, urging the ISO community to maintain its quick and flexible approach to keep pace with today’s fast-moving industries.

The Korean Minister for Trade, Industry and Energy also identified globalization and international trade as drivers in the growing need for International Standards. “Global markets are becoming a single market, where we can make online purchases from the other side of the world with a single click,” he said.

The ISO General Assembly is a two-day meeting, hosted this year by KATS, the ISO member for Korea, bringing together 600 participants from 120 countries.