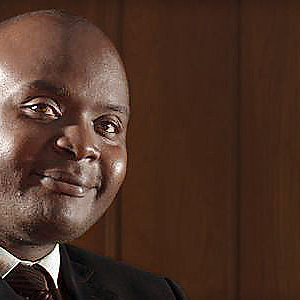 Amwayi Omukhweso William came from a humble background in rural Kenya. With much hard work and determination, he beat the odds and rose to the top on his own terms. Today, at the young age of 30, William is a Quality Assurance Officer at the Kenya Bureau of Standards (KEBS), and the winning author of the ISO/DIN contest for young standardizers in developing countries. Here, William shares his story.

When William greets me for an informal meeting in my office, he’s friendly, seemingly unguarded, and brings along his iPad. He’s dressed for success in what appears to be tailor-made dress pants and a long-sleeve, button-down shirt – very appropriate for his role as Quality Assurance Officer at the Kenya Bureau of Standards (KEBS), ISO member for the country.

William tells me that he’s immensely proud to contribute to the country’s economy. “I draw satisfaction from the fact that Kenyan manufacturers do appreciate the importance of standards in the current marketplace as a way of making their products competitive, not only in the local market but also at the international level.”

William is the winner of the 2012 ISO/DIN contest for young standardizers in developing countries. His essay on the role of standards in the Kenyan economy, according to DIN Chairman Dr. Torsten Bahke, very nicely linked the development objectives of his country, as contained in the national economic blueprint dubbed “Vision 2030”, to the need to apply International Standards in the sectors that are expected to lead growth, with an emphasis on export markets.

As we delve deeper into our discussion, often spattered with references to his childhood, William is poised and articulate. Amwayi Omukhweso William was born on 6 February 1983 in Western Kenya. William learns the value of work at an early age. His mother was a home maker and his father was an elementary school teacher.

The family’s home town of Khwisero was known to be an extremely poor neighbourhood. According to the Society for International Development’s Inequality Report, 64 % of Khwisero’s population live below the poverty line. The area residents are mainly subsistence farmers, growing crops like maize, beans and bananas for food. Just making a living can be a problem.

Even people who have “day jobs” often need to go home and travel far in the evenings to support their families. William was one of the fortunate ones.

Adolescence was an interesting time for William. He often collided with his Mother whom he considered a little too dictatorial. At school, the high academic requirements and strict discipline also created a certain amount of stress. Understandably, it was a time of mixed feelings, fraught with excitement and anxiety, a time of happiness and troubles, of discovery and disorientation, of breaks with the past and links to the future.

I ask William to imagine that he is a young child again, and to give himself advice. With no hesitation, he replies “making excellence a habit (to borrow the British Standards Institution’s motto), and the value of hard work. It is said that hard work is the yeast that raises the dough.”

At the young age of 30, William feels emotionally grounded. He gives credit to his mother and father for their support, and even their “tough love” attitude that prevailed throughout his childhood. He tells me that the values imparted by his parents were ones of responsibility and accountability, and being able to work with others. And so, thanks to their support, William persisted and eventually his tireless work ethic paid off. His graduation from university in 2007 marked a new beginning. From there, William took his chance. Doors began to open and standards soon came calling.

When I ask William why he joined standards, he clasps his hands and laughs. “Sheer coincidence !” he exclaims. “After graduating from university, KEBS advertised for an Animal Production Specialist. I applied, got an interview and I was offered the job. By then I had a vague picture about standards.”

Today, William is a young man passionate about standards. He explains how standards help businesses work more efficiently, increase productivity and access new markets. He goes on to describe how the food we eat must meet certain standards ; the drugs we take must comply with standards ; the vehicles we drive, like cars and bikes, use standardized and therefore interchangeable parts ; the phones we use must conform to standard interfaces. “You name it,” says William, “even the bed linen we sleep on has to be standardized in order to fit on the mattresses we use.”

As we wind down our interview, I ask William about his future ambitions : Are standards just a stepping stone to another career ? Or are they an end in themselves ?

“Goals are part of life,” says William. “To live without them is like shooting in darkness. I am passionate about standards. In developing countries, standards generally go unnoticed, viewed mostly as quiet, unseen forces. How standards come about is a mystery to most people.”

Before the age of 40, William would like to have made a significant mark on the world of standards, with the sole purpose of making the clarion call loud, insistent, consistent and clear. For the young Kenyan, developing countries should not only take a leading role in setting International Standards, they must also assume greater responsibility when it comes to influencing the standardization process.

“There is a lot that standards can offer,” says William, “it is the only sector that can accommodate any individual regardless of profession. I would encourage young people to dive in at the deep end into the big wide world of standards. It is a plunge they will never regret.”

I ask William to name the key to his success. He pauses and stares for a moment into the window overlooking my desk. “Success cannot be ‘in the blood’. You need to earn it. One of my favorite quotes from Thomas Edison says it all : ‘Success is one per cent inspiration, 99 % perspiration.’ It is the little things one does right every day that add up and will result in success.”

Which brings us back to William’s first paycheck : Did he splurge the money on something frivolous ? Or did he use it wisely, such as to pay back his debts ? William’s answer is quite surprising, and yet another testament to his hard, yet humble upbringing. “We have an interesting tradition in our lineage,” says William, “the first paycheck goes to the parents !”

I want to ask William to expand, but refrain knowing far too well that a little discretion, at the right moments, goes a long way. And as we shake hands, William leans in and looks at me, smiling. He wants to say something, but stops.