ISO is an independent, non-governmental international organization with a membership of 164 national standards bodies.

Through its members, it brings together experts to share knowledge and develop voluntary, consensus-based, market relevant International Standards that support innovation and provide solutions to global challenges.

You'll find our Central Secretariat in Geneva, Switzerland. Learn more about our structure and how we are governed.

International Standards make things work. They give world-class specifications for products, services and systems, to ensure quality, safety and efficiency. They are instrumental in facilitating international trade.

Learn more about standards and what they can do for you

Want to know more about ISO and standards?

Our key achievements in figures at a single glance

Looking to get certified?

The ISO story began in 1946 when delegates from 25 countries met at the Institute of Civil Engineers in London and decided to create a new international organization ‘to facilitate the international coordination and unification of industrial standards’. On 23 February 1947 the new organization, ISO, officially began operations.

Since then, we have published over 23037 International Standards covering almost all aspects of technology and manufacturing.

Today we have members from 164 countries and 782 technical committees and subcommittees to take care of standards development. More than 160 people work for ISO’s Central Secretariat in Geneva, Switzerland.

To find out more about the history of ISO, see our timeline. 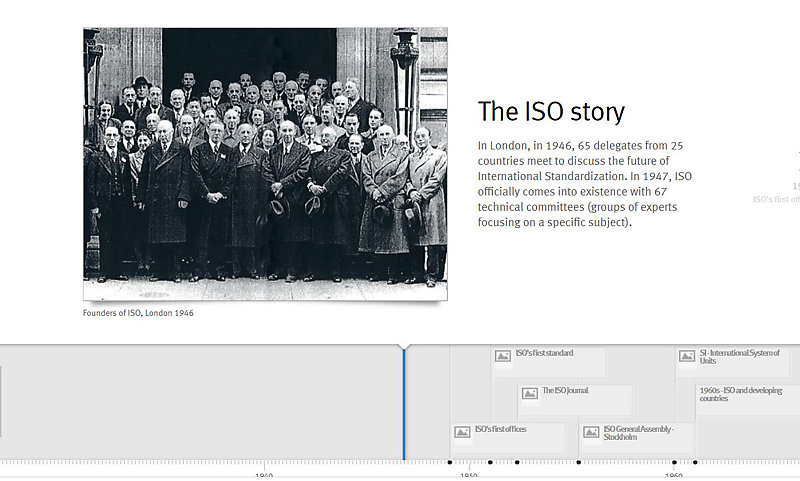 It's all in the name

Because 'International Organization for Standardization' would have different acronyms in different languages (IOS in English, OIN in French for Organisation internationale de normalisation), our founders decided to give it the short form ISO. ISO is derived from the Greek isos, meaning equal. Whatever the country, whatever the language, we are always ISO.

Read more about the history of ISO in the book Friendship Among Equals [PDF] published to mark ISO's 50th anniversary.

A summary of the year's activities

What are the benefits of ISO International Standards?

ISO International Standards ensure that products and services are safe, reliable and of good quality. For business, they are strategic tools that reduce costs by minimizing waste and errors and increasing productivity. They help companies to access new markets, level the playing field for developing countries and facilitate free and fair global trade.

How does ISO develop standards?

Our standards are developed by the people that need them, through a consensus process. Experts from all over the world develop the standards that are required by their sector. This means they reflect a wealth of international experience and knowledge.

Learn about how International Standards work in the real world,  address shared challenges and the things that matter most for people, the environment and business.

The question is, what matters to you?

The ISO Strategy outlines our priorities for the next five years. It provides guidance and strategic direction, helping us to respond to a future where constant change will require us to continually improve the ISO system.

2018 saw renewed emphasis on our strong network of ISO members that helps to make ISO standards more globally known. We also invested in the standards capabilities, the know-how and the talent to continue creating value for the international community.

An introduction to the ISO system, how it works and how ISO standards benefit the world.
Sitemap