ISO at COP25: International Standards are key to carbon transitions 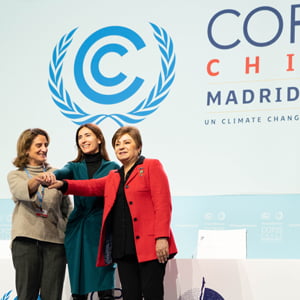 International Standards help countries meet climate change commitments and move towards carbon neutrality, according to leading sustainability experts who spoke at an ISO side event at the COP25 in Madrid, Spain.

The role of International Standards as essential tools for action on climate change in many countries was emphasized at the ISO-organized side event “Carbon Neutral Transitions and Standards as a ‘Measure, Reduce, Compensate’ Toolkit” held on 4 December 2019 within the framework of COP25.

Miguel Naranjo, Programme Officer at UN Climate Change, said that without climate neutrality there would be no achievement of the Paris Agreement goals, nor the United Nations’ Sustainable Development Goals.

“To achieve the goals of the Paris Agreement, we need urgent action by everyone. But that action needs to be credible,” he said.

“We are at risk of seeing a race to the bottom among actors wishing to be seen as “climate-friendly”, including those claiming climate neutrality. ISO standards and internationally agreed rules and guidelines play a crucial role in ensuring such credibility.”

Naranjo was speaking at the ISO-led event about the role of standards in achieving carbon neutrality and presented examples from UNFCCC Climate Neutral Now, an initiative to encourage everyone in society to play their part in achieving a climate-neutral world.

The event was held as part of the 25th Conference of the Parties of the United Nations Framework Convention on Climate Change (UNFCCC COP25) taking place under the presidency of Chile and held in Madrid, Spain, from 2-13 December 2019.

It was organized by the ISO Climate Change Coordination Task Force (ISO TF7) in partnership with the Institute of Environmental Management and Assessment (IEMA) and the International Accreditation Forum (IAF), with the support of UNFCCC, Costa Rica and UNE, ISO’s member for Spain. Highlights included talks and discussions about carbon-neutral transitions and standards’ role in achieving these through measuring, reducing and compensating emissions.

The keynote presentation was delivered by Laura Mora, from the government of Costa Rica, who highlighted the country’s pioneering climate leadership as well as the importance of standards for their national carbon neutrality programme (Programa Paίs Carbono Neutralidad, PPCN). Other guest speakers included Tetsuya Tanaka from the Carbon Offsetting and Reduction Scheme for International Aviation (CORSIA).

The Task Force TF7 works with experts from across ISO committees, guiding them to address critical aspects of climate change in ISO standards.

Nick Blyth, Chair of the ISO TF7, stressed the importance of International Standards in helping organizations achieve their climate action goals and address their carbon footprint.

“ISO standards are increasingly recognized as an essential part of the climate action toolbox through enabling organizations to measure their greenhouse gas emissions (GHG) and take appropriate measures to reduce them,” he said.

The event was also an opportunity to discuss the proposal for a new project on carbon neutrality, which will provide the requirements and principles to achieve that through the quantification, management, avoidance, reduction and compensation of GHG emissions.

ISO experts also presented at other COP25 events on various new ISO standards that help to achieve climate change goals, including ISO 14067 for the carbon footprint of products and ISO 14090 for climate change adaptation.

For more information about how ISO standards help organizations adapt to and mitigate climate change, see our dedicated Web page.