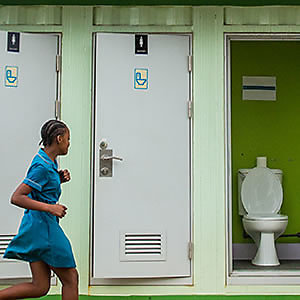 “International Standards are key to the progression of new sanitation technology and developing an industry that saves lives,” said ISO Secretary-General Sergio Mujica at the Reinvented Toilet Expo held today in Beijing, China. Mujica was speaking on a high-level panel as part of the opening plenary that featured Bill Gates, Co-Chair of the Bill & Melinda Gates Foundation, and Dr Jim Yong Kim, President of the World Bank, as well as other leading representatives from industry and government.

The panel, which is part of the three-day Reinvented Toilet Expo summit, discussed commitments to non-sewered sanitation and actions required to develop the industry, including standardization. Reinvented toilet technology is all about stand-alone sanitation systems that safely treat waste without the need to be connected to a traditional sewerage system. It is designed to revolutionize the lives of billions of people around the world who lack sufficient clean sanitation systems, saving lives and improving well-being.

Keynote speaker Bill Gates said: “This expo showcases, for the first time, radically new and pilot-tested approaches to sanitation that will provide effective alternatives for collecting, managing and treating human waste. The technologies you’ll see here are the most significant advances in sanitation in nearly two hundred years.”

This technology can be supported and further developed with the launch of the world’s first dedicated International Standard. ISO 30500, Non-sewered sanitation systems – Prefabricated integrated treatment units – General safety and performance requirements for design and testing, provides safety and performance requirements that will not only enable their effective manufacture, but the development of the sector as a whole.

Commenting on China’s “toilet revolution” and action plan for progressing safe sanitation, Gates added: “We look forward to China adopting a high-level standard (ISO 30500) for the non-sewered sanitation industry, which will further accelerate its leadership of a new commercial sanitation sector.”

Other highlights of the event include the “sanitation change-makers speaker series”, which features members from governments, industry and international organizations sharing their inspiring stories and achievements to improve sanitation services for the 4.5 billion people worldwide who live without them.

The Reinvented Toilet Expo is a three-day summit for governments, development banks and private-sector leaders wanting to accelerate the adoption of innovative sanitation technologies in developing regions around the world. These technologies are at the forefront of a growing movement to improve sanitation for the world’s poorest and contributes towards global water and sanitation targets outlined in the United Nations Sustainable Development Goal (SDG) 6.

The Expo features companies from around the world displaying new sanitation solutions that eliminate harmful pathogens and convert waste into by-products without the need to be attached to mains sewers.

It also highlights the recent publication of ISO 30500 and the fact that many of the new technologies and products in this area are expected to meet the requirements of the standard to demonstrate that they are safe and perform effectively.

Find out how ISO standards contribute directly to all of the SDGs.