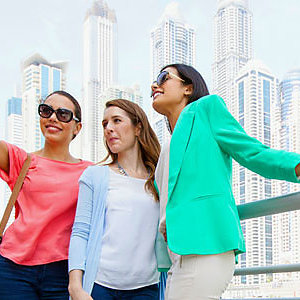 A future of smart cities promises to make our life easier and more pleasant. Here, as the Convenor of the ISO working group on city indicators, Dr. Patricia McCarney shares her thoughts about the needs of our cities, and why a citizen-centric approach is a smart choice.

A smart future for our cities is not just one where information and communication technologies (ICTs) reign; it is one where the use of ICTs creates new services for citizens, enhances or replaces infrastructure and improves economic growth. This “citizen-centric” approach will change how the urban dweller moves, thinks, cooperates and works in ways that will be smart, very smart indeed.

Dr. Patricia McCarney is no novice when it comes to smart cities. She has made the smart city agenda a key element in her career. Today, McCarney is the Convener of working group WG 2 on city indicators within ISO technical committee ISO/TC 268 on sustainable development of communities, President and CEO of the World Council on City Data (WCCD) and Director of the Global Cities Institute (GCI) at the University of Toronto in Canada. Here, she shares with us some of the smart city trends, the challenges, and how standards provide the platform from which smart cities can grow.

ISOfocus: Discussions of smart cities are increasingly a part of urban development aims worldwide. However, despite this celebrated approach, it is still hard to describe what lies behind the labelling phenomenon of the so-called “smart city”. How would you define the concept?

Patricia McCarney: Firstly, thank you for the opportunity to speak about this important global initiative on smart cities and the leading role that ISO is taking in its implementation through the development of a new ISO standard on smart city metrics.

The definition of a smart city is an evolving concept. The ISO Technical Management Board’s Strategic Advisory Group on Smart Cities gives a working definition of a “smart city” as one that: “[…] increases the pace at which it improves social, economic and environmental sustainability outcomes, responding to challenges such as climate change, rapid population growth and political and economic instability by improving how it engages with society, how it applies collaborative leadership methods, how it works across disciplines and city systems, and how it uses data information and modern technologies in order to provide better services and quality of life to those in, and involved with, the city, now and for the foreseeable future, without unfair disadvantage to others or degradation of the natural environment”.

This definition captures much of the global thinking behind the idea and supports the essential balance between ICTs and quality of city life. It helps broaden the smart cities agenda from a more singular focus on ICT in the early definitional work, to considering how the enormous growth and potential of ICT and the tremendous role of city data and big data can support cities in creating more livable and resource-efficient environments as well as more inclusive prosperity for citizens.

ICT can play a key role in improving more intelligent uses of energy. What are the necessary prerequisites for a smart city to meet the goals of economic and environmental sustainability?

While it is difficult to define an exhaustive list of necessary prerequisites for a smart city to meet the goals of economic and environmental sustainability, there are certainly several cities that are leading the effort. Amsterdam (one of the first cities certified under ISO 37120, Indicators for city services and quality of life), for example, defines an ideal smart city as one that focuses on investment in capital and communications infrastructure, which fuels sustainable economic growth and a high quality of life, while efficiently using natural resources. The entire concept of a smart city is constantly evolving, as are the technology, resources and scholarship behind it. The Amsterdam definition, however, seems extremely close to a desired outcome for cities wishing to become smart.

When cities implement ICT solutions for more energy-efficient goals, one of the key prerequisites to effective results is standardized metrics that monitor performance. The stakes are high in cities.

According to the 2015 Energy Productivity and Economic Prosperity Index, residential and commercial buildings account for 31 % of the world’s energy consumption. Smarter building design and construction, together with smart metering, sensors for heating and cooling and smart lighting, are all key to more resource-efficient cities.

Coupled with smarter mobility solutions, cities are pivotal to the global agenda on energy efficiency. The work of ISO/TC 268/SC 1 on smart community infrastructure is also helping cities to build smarter infrastructure solutions. City data to track performance and build data-informed results requires standardized measurement, a key goal in the new ISO standards being developed by ISO/TC 268/WG 2 specializing in city indicators. Standardized data globally enables cities to exchange and learn from each other.

Could you cite a couple of examples of pioneering cities on smart initiatives? What have been the lessons learned during smart development?

At the Global Cities Institute (GCI) of the University of Toronto at which I serve as Director, and the World Council on City Data (WCCD), which is leading the rollout of ISO 37120, we are seeing many of the WCCD Foundation Cities as leaders on the smart cities agenda. Each of these cities has stepped up to confront the essential challenge of enhancing the citizen’s quality of life, while balancing the need to be environmentally conscious and cost-effective.

As for lessons learned, we have certainly gleaned some observations and early results from the adoption of ISO 37120, just in these recent months. Cities are making space for innovation to occur organically. Many of the initial 20 cities that have adopted the standard, have recognized the collection of data as being very integrated into their culture of innovation.

Examples include “innovation hubs” – places in their cities where ideas for things like apps, start-ups, non-traditional dwellings and citizen engagement can be incubated. For example, London has its Urban Innovation Centre, there is a new Dubai Innovation Hub, Boston has an Innovation District, Barcelona the @22 Barcelona Lab, and Los Angeles boasts a Civic Innovation Lab. These city innovation labs leverage public knowledge to identify and solve key local problems using data available from their open data portals. This integration of open city data and innovation is so critical to the smart city agenda going forward.

As I alluded to previously as a requirement for smart cities, each of these cities has taken a “citizen-centric” approach and has used the integration of technology and data to create new services for citizens, enhance or replace infrastructure and improve economic growth.

How can ISO standards contribute to the work of urban researchers, architects, designers, policy makers, developers, economists, and industry leaders the world over, and, as such, to the success of smart cities?

As smart cities flourish around the world, standards help to create a common language for evaluation by all stakeholders. The WCCD has revolutionized International Standards for cities with ISO 37120. We have gone a step further in operationalizing this standard and have created a dynamic, highly visual open city data portal that allows everyone, from city leaders to high-school students, to analyse their city relative to other cities around the world – fostering a culture of knowledge exchange and direct interaction.

Percentage of the world population that will be urbanized by 2050

Through this knowledge sharing, a new system is emerging in which cities engage in “para-diplomacy” (that is to say, city-to-city knowledge and partnership exchange) paired with the more traditional idea of “soft-diplomacy” through person-to-person contact (for example, the Chief Innovation Officer of Boston contacting his or her counterpart in Johannesburg to discuss a new and innovative housing solution). This new ISO standard on indicators for smart cities will thus facilitate the work of urban researchers, architects, designers, policy makers, developers, economists and industry leaders the world over, by building standardized city data that will contribute to the success of smart cities.

It is said that there is no better way of enhancing the life of thousands of millions of people around the world than improving the way in which cities work. How can standards help foster innovation and make people’s life more pleasant?

The tilt towards an urban planet that started in 2007 has led to urbanization becoming a defining phenomenon of the 21st century. By 2050 it is predicted that 70 % of the world population will be urbanized. Standards improve the ability of cities to better manage and innovate for the future.

At a micro-level, standards provide requirements for monitoring technical and functional performance. They ensure that technologies used in cities are safe and efficient. Standards also take into account best practices for business and optimal management of resources, which help to reduce environmental impact and improve service delivery to citizens.

International Standards like the ones we are developing in ISO/TC 268 are improving cities by providing a common platform for cities to communicate and exchange knowledge. For example, ISO 37120 provides a set of indicators with consistent and standardized definitions and methodologies so cities can communicate and learn from each other. As more cities are working with the WCCD in adopting ISO 37120, this global dialogue expands and deepens to also inform regional specificity.

This dialogue amongst cities becomes a catalyst for continuous learning and the improved delivery of city services toward better quality of life. Finally, I believe that standards help to identify where service gaps exist and through collaborative engagement with citizens, action groups and the private sector, standards open the door to innovation.