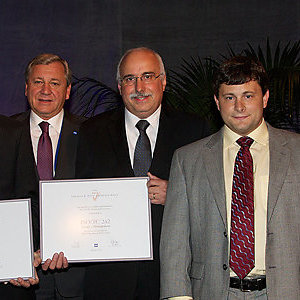 By Roger Frost
Tagged as

The achievement of a team of experts who developed the ISO 50001 International Standard for energy management has been recognized through an award for superior performance, presented on 19 September at the 35th ISO General Assembly, held in San Diego, USA.

Published in June 2011, ISO 50001 has experienced a rapid international uptake and is already implemented in 44 countries worldwide.

Announcing the award winner, ISO President, Dr. Boris Aleshin, pointed out that energy is critical to organizational operations and can be a major cost to organizations, whatever their activities. In addition to the economic costs of energy to an organization, energy can impose environmental and societal costs by depleting resources and contributing to problems such as climate change.

"Individual organizations cannot control energy prices" he said, "but they can improve the way they manage their energy consumption. Improved energy performance can provide rapid benefits for an organization by maximizing the use of its energy sources and energy-related assets.

"ISO 50001 provides a framework for industrial plants; commercial, institutional, or governmental facilities; or entire organizations to manage energy. Targeting broad applicability across national economic sectors, it is estimated that the standard could influence up to 60 % of the world’s energy use."

ISO identified energy management as one of the top five fields for the development of International Standards and in 2008 created a project committee, ISO/PC 242, Energy management, to carry out the work. ISO/PC 242 was led by ISO members for the United States (ANSI) and Brazil (ABNT). In addition, its leadership included the ISO members for China (SAC) and the United Kingdom (BSI) to ensure that developed and developing economies participate together in the strategic direction and administration of the project committee. It was transformed into a technical committee in June 2011, signifying that it will be developing additional standards.

Today, experts from the national standards bodies of 48 ISO member countries participate within ISO/TC 242, with another 17 countries as observers.

The specific factors which led to the selection of ISO/TC 242 as winner of the 2012 LDE Award include the following: