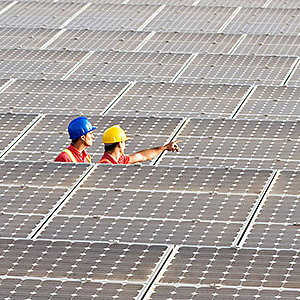 ISO 50001 is under revision after its first five years of service. But as the energy management standard that held so much promise for a clean energy future enters this new stage, the time is ripe to ask the question: “How has it done so far?”

“Last year the world set two new records – global investment in renewable energy was the highest ever, and, for the first time, more than half of the worldʼs new electric capacity came from clean sources.” Those were the words of US President Barack Obama, delivered via a video recording to the audience of energy ministers from around the globe at the 2016 Clean Energy Ministerial (CEM) in San Francisco, USA.

That was the good news. President Obama went on to warn that we are treading an alarming threshold when it comes to global temperatures. “We have to accelerate our transition to the clean energy of tomorrow,” he admonished, drawing attention to last yearʼs COP21 climate change conference in Paris where, together with 19 other countries, the US announced a new goal to double its clean energy research over the next five years.

The world is ready for change. In September 2016, Chinese President Xi Jinping made history when he ratified the Paris Agreement signed at COP21, a move followed suit by the US – the two biggest emitters of greenhouse gases. But as President Obama recognized at the CEM, this is a goal that governments cannot achieve alone. Business leaders have a role to play; individual companies can make a powerful contribution to addressing the energy challenge in their day-to-day activities. It helps, of course, when these actions also benefit the companyʼs bottom line.

The benefits of ISO 50001 are twofold. On the one hand, it can help us cut our carbon dioxide (CO2) emissions. Increased adoption of ISO 50001 could mean a reduction of CO2 emissions equivalent to removing 215 million passenger vehicles from the road by 2030. On the other hand, adopting the standard makes business sense, with predicted energy savings of USD 600 billion (62 exajoules) over that same period.

Itʼs no surprise, then, that many countries see ISO 50001 as a strategic tool towards a sustainable energy future, making the standard an integral part of their energy policies. And governments are being proactive, using tax rebates, access to research funding and other incentives to mobilize companies to use it. The CEM, for example, gave rise to an initiative to clock up “50 001 certifications” to ISO 50001 by 2020.

The support is clearly there but, five years on, has the standard lived up to the hype? First, let us start by looking at what ISO 50001 is – and, more importantly, what it isnʼt. By the time work on the standard began in 2008, energy management was no longer a revolutionary concept. The world was dawning to the fact that “yes, we need energy”, but climate change and the limited supply of fossil fuels made sustainability a key priority.

Several countries had already developed their own energy management system standards, so there was an urgency to have a single International Standard that met the needs of increasingly global companies. ISO 50001 offers organizations a framework to integrate energy efficiency into their daily operations. Its guidance can be used to secure resources for business continuity and resilience, adapt to change, and be ready for volatile energy prices and unconventional and intermittent energy resources.

Above all, ISO 50001 empowers individual organizations. “Living in a world of uncertainty, companies cannot control prices, government policies or the global economy, but they can improve the way they manage energy,” says Roland Risser, Chair of ISO technical committee ISO/TC 242 on energy management that developed the standard. “The benefits are obvious: better use of resources and assets and less costs and consumption. Not to mention the added bonus of letting the world know that they are helping to make our planet a more sustainable place. We all win.”

A culture of efficiency

The figures are there to prove it. Cummins, a company involved in power generation productions, saved over USD 3 million annually using ISO 50001, while Korean chemical company LG Chem reduced its energy consumption by 10 % and costs by USD 9 million. These are just two examples among many similar success stories with impressive results.

A programme led by the US Department of Energy, for example, demonstrated that ISO 50001 not only increased energy savings, but facilities using the standard outperformed those that didnʼt by up to 65 %. And this is not just true of developed countries; Mexicoʼs National Programme for the Sustainable Use of Energy (PRONASE) is expected to result in savings of 25 % in electricity and 37 % in natural gas over two years.

The first five years of ISO 50001 have consistently delivered savings of between 5 % and 30 % of current energy costs. Brazilian electric and power company WEG was among the first to adopt the standard in its country. “Energy management made sense,” said João Alfredo Silveira, Manager, Department of Training and Continual Improvement at WEG. “We had already put some effort into efficient equipment, so for us the greatest ISO 50001 benefit was that it helped our employees to become aware of the importance of saving energy at every step. It helped us introduce a culture of energy efficiency.”

In WEGʼs case, employees are really part and parcel of the success. For energy management to work, they need to believe in what is being accomplished. “This starts with the clear definition of policies, procedures and goals, which are then consolidated by training and qualifications. Once thatʼs done, your people will make things happen,” concludes Silveira. The gamble has paid off, with WEG reporting a reduction in electric energy consumption of 17 % on test laboratories and 13 % on production assembly lines.

The simpler, the better

While the overwhelming conclusion is that ISO 50001 works, itʼs time to take stock of what still needs to be improved as the standard undergoes its first periodic revision. For Risser, the biggest challenge is keeping the standard user-friendly and straightforward.

“Itʼs simple. Itʼs flexible. It brings results. ISO 50001 has worked well up until now because organizations know that they are not engaging in a cumbersome process.” Of course, this doesnʼt mean it should not be revised, he says. “As we work to take this standard to the next level, we need to ensure that we only add new topics that cost-effectively deliver real results. This is the single factor that will keep organizations motivated to adopt the ISO standard.”

One of the changes Risser foresees in the new edition is better integration with ISO 9001 and ISO 14001. “Thatʼs a trend we are seeing with various ISO management systems standards (MSS). It means less focus on procedures and a drive towards common tools, terms and processes across organizations,” he says. “But letʼs not forget that ISO 50001 is unique among ISO MSSs in that continual improvement has a dual focus: the management system itself, as well as energy performance.”

For Risser, this is what makes ISO 50001 a powerful tool to help countries meet the commitments of the Paris Agreement. The standard continually challenges organizations to deliver greater energy savings, while ensuring these gains are sustained in the long term. Even organizations with mature energy efficiency programmes can still improve by 10 % or more after using ISO 50001.

Our world, our future

Another question that people will ask during the revision is how well it addresses the needs of developing countries. For Silveira, the biggest challenges these countries face are in terms of competitiveness and productivity. Energy efforts have to help meet these challenges. For a company that already sees the benefit of reducing energy, ISO 50001 can take it to the next level, by harmonizing and driving efforts. But for those who havenʼt taken the leap yet, it can be eye-opening. “For WEG, energy efficiency has actually become one of its great competitive advantages,” says Silveira.

Zhou Lu, Vice-President of certification body CTI-Cert in China, has helped many Chinese companies use ISO 50001. He says the standard has helped them to establish an energy-saving culture in the organization. “ISO 50001 helps you pay more attention to energy costs and investment, make savings and focus on energy meter and data management. They donʼt even need to invest in complex solutions, but simply find more efficient ways to handle the every day. Just making sure to turn the light off when nobody is in the room makes an impact in the long term.”

According to Zhou Lu, there is a lot of Interest from the Chinese government to push efficiency onto the agenda, as it is becoming critical for sustainability in an increasingly energy-intensive economy. But there are challenges. Results donʼt happen overnight, which means some organizations may become impatient. He believes that increasing the value and recognition of certification can drive further adoption. “We want more people to learn about ISO 50001, and to use it, because this can really make an impact, not just to companies, but to our future,” he concludes.

For President Obama, the challenges presented by climate change affect us all. “To address this threat with the urgency it deserves, we have to do more together. Above all, we have to trust each other and push one another,” he urged in his video message. “There is only one way to solve a problem that threatens all of us and that is by working together. Thereʼs nothing more important than the world we leave to our children.”

ISOfocus
Our connected future
In a few short years the Internet of Things (IoT) will be connected to nearly 50 billion “things” of one kind or another. This issue covers the most pervasive and ubiquitous IoT advances, trends and opinions
Elizabeth Gasiorowski-Denis